Quantum computing[11] is located in the intersection of two fields, computer science and quantum mechanics, and it concerns the use of unique quantum mechanical systems properties to solving computational problems. For some time, it became clear that there is a class of computational problems that can be solved much more efficiently by utilizing the computational capabilities of subatomic computational systems. By applying the unique effects of quantum mechanics (such as the interference of wave functions, quantum parallelism, superposition of states, quantum entanglement and coherence), certain computational problems could be solved extremely efficiently, more effeciently than it would be ever possible with any classical computing machine. Examples of such tasks include factorization of numbers[15] and searching an unsorted collection[7]. In addition to algorithmic problems, the unique quantum mechanics phenomena can be applied in information theory (quantum teleportation protocol[1,2,3], superdense coding[11]), which has a huge impact on cryptography and cryptoanalysis. Also, quantum computing principles can be applied in game theory and artificial intelligence[5,6,17]. According to some hypotheses (especially, due to Penrose[12,13] and Hameroff[8,9]), quantum effects may be necessary to explain the non-algorithmic mysteries of the human mind, human consciousness, imagination and intelligence. On the other hand, Artificial Intelligence provides methods for semi-automatic design of quantum algorithms[5,6], which by their nature are non-intuitive and difficult to handle for the human mind. Consequently, quantum computing and artificial intelligence mutually inspire and enrich each other.

The basic units of information in quantum computing are qubits and quantum registers. Qubit is a normalized vector in the two-dimensional, complex Hilbert state space of two-level quantum system. The coordinates of the vector define the probability of observing the qubit base states. Therefore, the qubit $$\vert\Phi\rangle$$ holds the superposition of two basic states $$\vert0\rangle$$ and $$\vert1\rangle$$, simultaneously:

where $$\alpha, \beta \in \mathbb{C}$$ and $$\vert\alpha\vert^2 + \vert\beta\vert^2 = 1$$. The complex numbers $$\alpha$$ and $$\beta$$ are probability amplitudes, and the probability of observing the base states $$\vert0\rangle$$ and $$\vert1\rangle$$ are $$\vert\alpha\vert^2$$ and $$\vert\beta\vert^2$$, respectively. The vectors $$\vert0\rangle$$ and $$\vert1\rangle$$ form the canonical basis of the two-dimensional, complex space of possible qubit states. Using Dirac notation, the qubit state can be also rewritten as a column vector $$\vert\Phi\rangle = \left[\alpha\atop\beta\right]$$. In Figure 1 (on the left), the geometric illustration of a qubit state has been presented.

A system of many interconnected qubits constitutes a quantum register, which — according to one of the quantum mechanics postulates — can be considered as an isolated system composed of many components (i.e. qubits belonging to the register). The state space of quantum register is the tensor product of the individual qubits state spaces. Therefore, the state of n-qubit quantum register $$\vert\Psi\rangle$$ is represented as a normalized vector in $$2^n$$-dimensional complex Hilbert space. Consequently, this allows to encode a superposition of $$2^n$$ different base states $$\vert0\rangle \ldots \vert2^n-1\rangle$$:

where $$\omega_i \in \mathbb{C}$$ is the probability amplitude of observing the quantum register base state $$\vert{}i\rangle$$. The probability of observing the base state $$\vert{}i\rangle$$ is $$\vert\omega_i \vert^2$$, and obviously $$\vert\omega_0\vert^2 + \vert\omega_1\vert^2 + \ldots + \vert \omega_ {2^n-1} \vert^2 = 1$$. The geometric illustration of a quantum register consisting of three qubits has been presented in Figure 1 (on the right). One of the unique properties of quantum computing is that with a linear increase in the number of qubits in a register, the dimension of quantum register state space grows exponentially.

One of the formal models of quantum computing, which allows to describe and simulate any quantum computation, is quantum circuits model consisting of quantum logic gates. Equivalent, but usually far less useful, theoretical device of quantum computation capabilities is Quantum Turing Machine. Quantum logic gate, acting on a quantum register of n qubits, is a mapping of $$2^n$$-dimensional complex Hilbert space into the same $$2^n$$-dimensional space given by a $$2^n \times 2^n$$ unitary matrix of complex elements. The basic quantum gates set includes: Not gate, Controlled-Not gate (CNot), phase shift gate, Hadamard gate (H) and identity gate. The matrices of the gates are as follows:

In Figure 2, examples of two quantum circuits have been presented.

In an object-oriented programming language (such as Python or Java), the fundamental notions of quantum computing (qubits, quantum registers and gates and others) and their relations can be illustrated by a UML class diagram. I have proposed an object model for quantum computing, and the UML class diagram of the model has been presented in Figure 3. It allows simulating quantum algorithms (i.e. creating virtual quantum computers), and I have implemented this object model in my qclib library for Python. 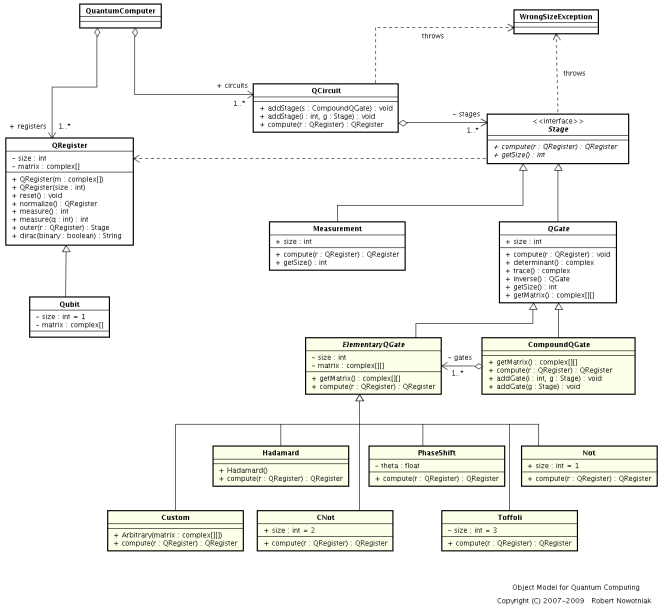 Only few quantum algorithms which have practical application have been found so far. The most important of them have been listed below:

For several reasons, designing a quantum algorithm is a difficult task. There is a very poor analogy to classical algorithms, due to the use of non-intuitive phenomena of quantum mechanics, such as the superposition of states, the interference of probability amplitudes, quantum entanglement and parallelism. Quantum algorithms are probabilistic algorithms, which means that they are based on the probability and its evolution in time. Instead of basic complexity classes, like P, NP, BPP, quantum algorithms have an additional set of complexities, EQP, BQP, and NQP. Fortunately, elements of quantum algorithms can be designed semi-automatically with modern artificial intelligence techniques. For example, unitary matrices representing quantum logic gates can be optimized efficiently with evolutionary algorithms[5,6], and complete quantum circuits can be designed automatically with genetic programming techniques[14,17].

Towards a real quantum computer… 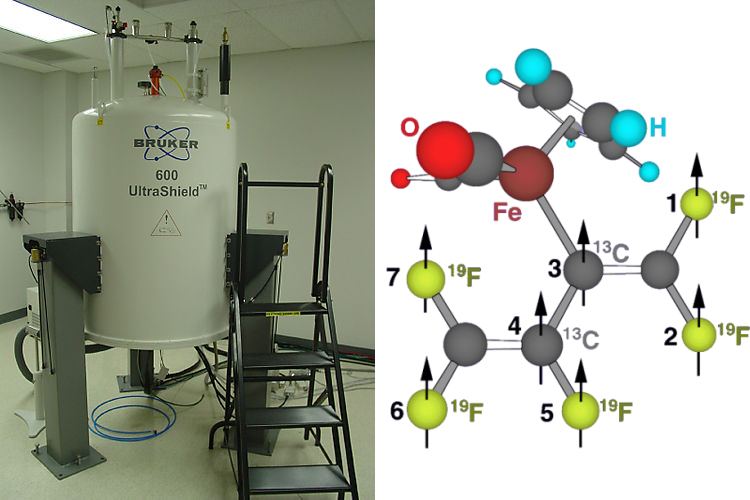 Building a real, functional and scalable quantum computer is still far from being achieved. Although, there are multiple promising approaches, giving hope to accomplish this objective in the future. Major difficulties appear after exceeding some, currently small, number of qubits in quantum registers. Building a quantum computer requires a physical system which allows to keep a very “fragile” state of quantum coherence. Physical phenomena offering such property include: nuclear magnetic resonance (NMR)[10,16], electron energy in atomic orbitals, the polarization of light, quantum dots, ion traps, Bose-Einstein condensate, and many other phenomena. Especially, much research effort has been already devoted to the use of nuclear magnetic resonance. In Figure 4, NMR spectrometer and a molecule consisting of atoms having an internal magnetic moment (magnetic spin), have been presented. The magnetic spins of the particles can be considered as the base vectors of quantum register state space. The spins, corresponding to states of seven qubits, can be set with an external electromagnetic field. Observation of such quantum register state is achieved through examination of the spectrum with the NMR spectrometer.

All these issues presented briefly above have been exhaustively described in my master’s thesis, “On The Evolutionary Design of Quantum Algorithms” (in Polish), and I invite all the interested persons to read there more.

For more, please also check in my scientific papers section.